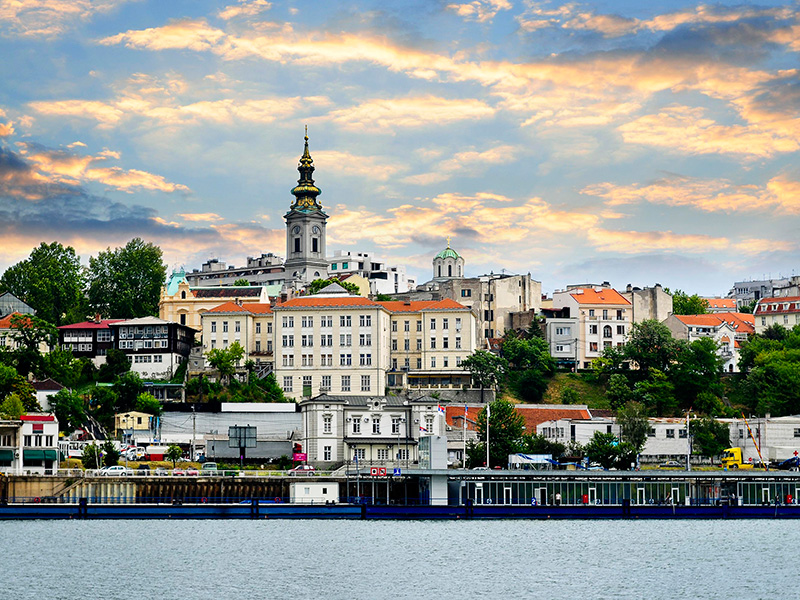 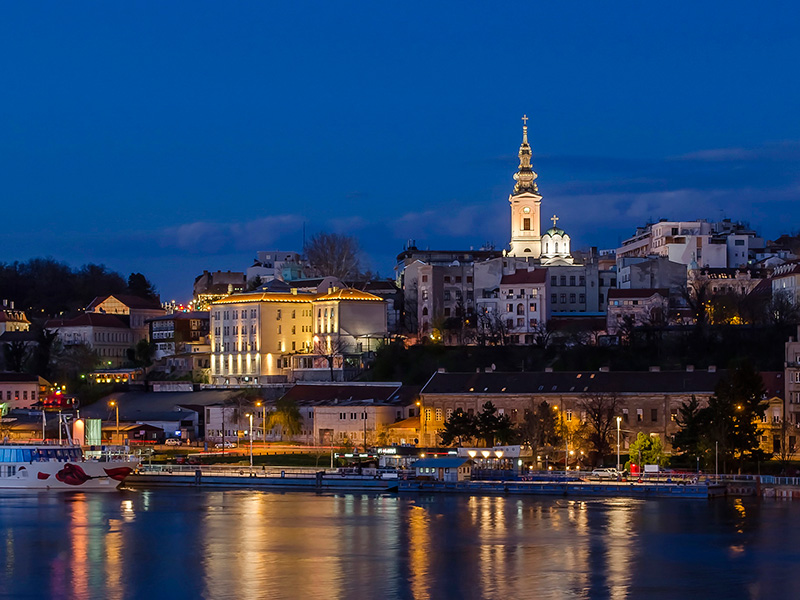 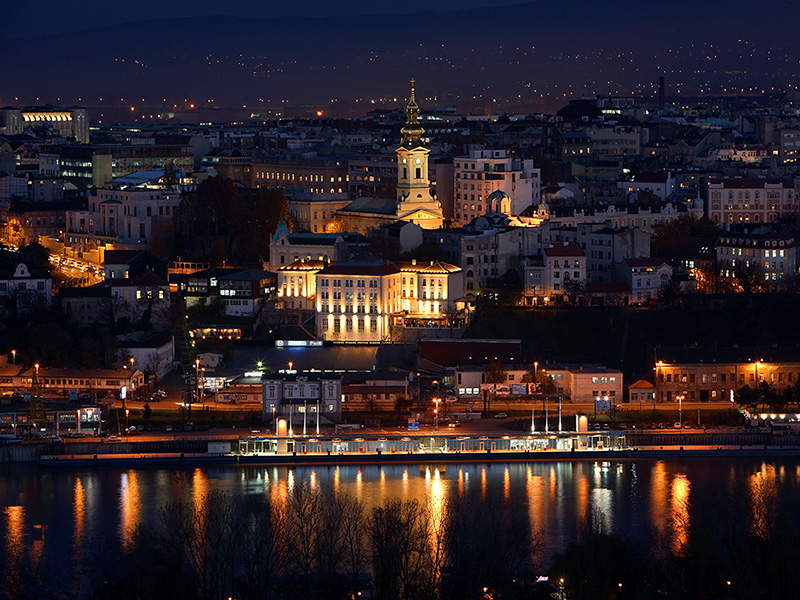 Belgrade is the capital city of Serbia and has a population of around 1.7 million. It is one of the oldest cities in Europe and has since ancient times been an important crossing of the ways where the roads of eastern and western Europe meet. The city lies on two international waterways, at the confluence of the Sava and Danube rivers, which surround it on three sides. Because of this position, Belgrade is fittingly referred to as the Gateway to the Balkans and the door to Central Europe. Its most significant landmark is Belgrade Fortress, an imposing fortress at the confluence of the Danube and the Sava rivers. A testament to the city’s strategic importance to the Roman, Byzantine, Ottoman, Serbian and Austrian empires, the fortress is now the site of several museums and Kalemegdan, a vast park.

There are several attractions in Belgrade, whis is deserving couple of days to see them: Here we would like to mention them shortly. Most of the attractions are in our daily tour offers and we can also combine them for you according to your choice.


Tour No 1 : THE PRIMEVAL BEGINNINGS OF THE WHITE CITY
Belgrade Fortress and Kalemegdan Park are an open-air museum of the city’s history. Within the walls of the fort, there are a lot of monuments testifying of the development of the city from ancient to contemporary times.

Tour No 2: THE STREET OF A NOBLE PRINCE No 2
The pedestrian zone and the trading centre – Knez Mihailova Street and the Republic Square – are amongst the architectonically worthiest and liveliest parts of the city.

Tour No 3: THE BOHEMIAN QUARTER
There is a catch phrase, “He who has not been to Skadarlija has not been to Belgrade either.” On that old, cobbled street, there are famous inns:  They cherish the tradition of joyful hangout with old town music and specialties of the national cuisine.

Tour No 4 : SAVAMALA – A CREATIVE DISTRICT
One of the oldest and until recently neglected quarters is going through an exciting transformation and is again becoming the cultural focal point of the city.


Tour No 5 : ST. SAVA’S TEMPLE
One of the largest Orthodox temples in the world was built on the spacious square in Vračar


Tour No 6: THE ROYAL COMPOUND
The Royal Palace and the White Palace testify of the history and refined artistic feel of the Serbian Karadjordjević dynasty.

Tour No 7: REMEBERING TITO AND SOCIALISM
The permanent exhibition of the Museum of Yugoslav History vividly witnesses about the history of the former Yugoslavia and the life and work of its legendary president Josip Broz Tito.

Tour No 8 : OLD ZEMUN
Once on the very border of the two empires, Zemun still gives impression of the atmosphere of the Austrian-Hungarian Empire. Gardoš Tower, offering a panoramic view of the Danube, is the symbol of that extraordinary city.

Tour No 9: BELGRADE RIVERS – SAVA AND DANUBE
The quay at the Confluence, Zemun Quay and the Sava River Harbour are only part of the space on the river banks offering different amenities: tourist sightseeing of the city from the rivers is recommended.

TourNo 10 : ADA CIGANLIJA
The Belgrade sea – a beautiful river lake surrounded by a wood, with a line of coffee shops, restaurants, bicycle trails and courts is the most beautiful recreational zone of the city.

Tour No 11: TOPČIDER PARK
The court park, the court church and the oriental residence of the great Serbian ruler Miloš Obrenović speak volumes about liberation of Serbia from the Ottomans. A magnificent old plane tree is its prominent feature.

Tour No 12: AVALA
The Tower of Avala, located on the mountain of the same name, is yet another landmark of the city, testifying of the power of Belgrade to raise itself out of the ashes.

Tour no 13: MEMORY OF THE WORLD
The Archive of Nikola Tesla, a scientific genius who “illuminated the planet”, is inscribed on the UNESCO List of Intangible Cultural Heritage.


Tour no 14 : VINČA’S EIGHTH MILLENNIUM
One of the brightest chapters in the European prehistory was written no more than fifteen kilometres or so from Belgrade – in today’s settlement of Vinča. 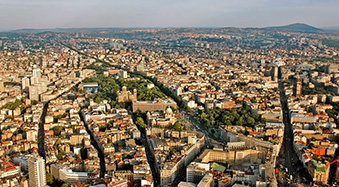 Belgrade lies 116.75 metres (383.0 ft) above sea level and is located at the confluence of the Danube and Sava rivers. The historical core of Belgrade, Kalemegdan, lies on the right banks of both rivers. Since the 19th century, the city has been expanding to the south and east; after World War II, Novi Beograd (New Belgrade) was built on the left bank. 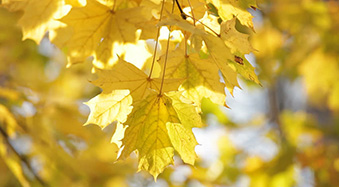 Chipped stone tools found at Zemun show that the area around Belgrade was inhabited by nomadic foragers in the Palaeolithic and Mesolithic eras. Some of these tools belong to the Mousterian industry, which are associated with Neanderthals rather than modern humans. Aurignacian and Gravettian tools have also been discovered there, indicating occupation between 50,000 and 20,000 years ago.
The first farming people to settle in the region are associated with the Neolithic Starčevo culture, which flourished between 6200 and 5200 BC.

One of the brightest chapters in the european prehistory was written no more than fifteen kilometers or so from Belgrade, in today's settlement of Vinca. The findings of this locality are so much significant that the whole culture of the late neolith of south –east Europe was named after it – the Vinca Culture. 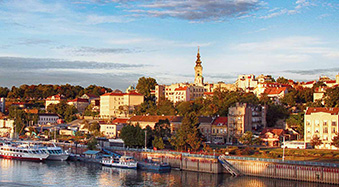 In Belgrade, every night is Friday night. Everyone is ready to party at all the time, dance the night away, and go straight to work the next day. It’s really hard to resist the temptation when you know that on any given evening there are countless clubs out there full of young, gorgeous people having so much fun. » 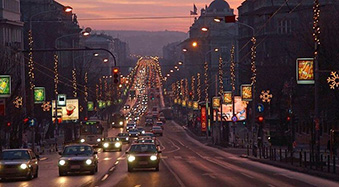 Belgrade has an extensive public transport system based on buses (118 urban lines and more than 300 suburban lines), trams (12 lines), and trolleybuses (8 lines). It is run by GSP Beograd and SP Lasta, in cooperation with private companies on various bus routes. The BusPlus ticketing system based on contactless smart cards began operating in February 2012, which you can buy at every kiosk according to your need

Belgrade is the capital and gate to all other cities in Serbia, because it is having International Airport Nikola Tesla and also main train and intercity  bus station.

We are recommending you to use bus or our transfer services for Intercity routes.

Here are our recommendations:

or
For Intercity Bus Station in Belgrade:You can take a taxi or shuttlebus A1( departs every twenty minutes during the day ) to reach main intercity bus station in the city center, by Taxi 10-15 minutes, approximately 15 EUR, by A1 shuttle 20-25 minutes, approximately 3 EUR. A1 departs every 20 minutes between certain hours during the day.
Optıons for TAXI :

Go to main hall of the intercity bus station to buy a bus ticket  to you destination city.